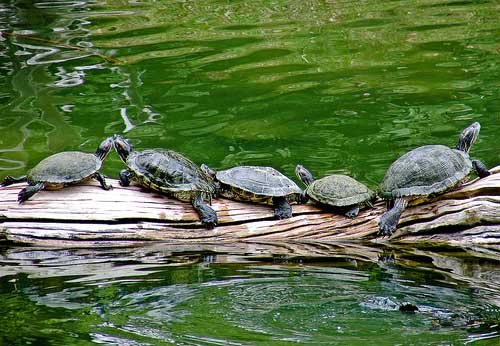 During the second year of their journey they found a place ideal for them at last! For about six months they cleaned up the area, unpacked the picnic basket, and completed the arrangements. Then they discovered they had forgotten the salt. A picnic without salt would be a disaster, they all agreed.

After a lengthy discussion, the youngest turtle was chosen to retrieve the salt from home. Although he was the fastest of the slow moving turtles, the little turtle whined, cried, and wobbled in his shell. He agreed to go on one condition: that no one would eat until he returned. The family consented and the little turtle left.

Then on the seventh year of his absence, the oldest turtle could no longer contain his hunger. He announced that he was going to eat and begun to unwrap a sandwich. At that point the little turtle suddenly popped out from behind a tree shouting,

”SEE! I knew you wouldn’t wait. Now I am not going to go get the salt.”

Some of us waste our time waiting for people to live up to our expectations. We are so concerned about what others are doing that we don’t do anything ourselves.