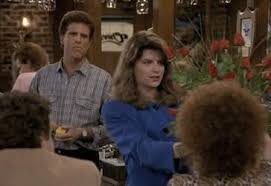 There have been many other Mormon references in TV shows and movies. One of my favorites not mentioned here was in ”Friends.” After Rachel found out she was pregnant, she was preparing for a date and was trying to determine how to explain to her date why she could not drink alcohol. She was thinking out loud, and one of the excuses she had come up with was that ”I could tell him that I am Mormon.”

Who can forget Star Trek IV when Captain Kirk attempted to cover for Spock? Kirk explained away Spock’s obvious weirdness as the result of the free speech movement and ”a little too much LDS.” For anyone who didn’t experience this classic moment and the resulting wall-to-wall laughter in the theater, the clip is available on YouTube

When Blanche’s sister needs a kidney transplant, she doesn’t know whether to donate her kidney or not. Luckily, she’s saved by a donor match whose kidney is spic-n-span from a life of clean living.

Blanche: Oh, well the most wonderful thing happened. They found a donor, an excellent match. She was a retired Mormon schoolteacher.

Blanche: Oh, I’ll say! That kidney was showroom new! Why, the wildest thing that ever passed through there was Ovaltine!

Sam: ”What are you talking about?”

Rebecca: ”I just wish someone would send me some … roses!”

Rebecca exits in a huff

Sam: ”Some people you just can’t discuss religion with.”

After Meredith’s drunken antics at an office party get out of hand, boss Michael Scott calls an impromptu intervention, and gets his materials from what sounds like lds.org.

Michael Scott: Meredith, have you ever used alcohol to alter your mood or deliberately change your state of mind?

Michael Scott: Do you sometimes have a drink to celebrate a special occasion or mark a holiday?

Michael Scott: Have you ever, under the influence of alcohol, questioned the teachings of the Mormon church?

Oscar: Where did you get this?

Michael Scott: I got it on a website. That’s not important.

Looking around at the number of children at his house, father Reginald (Red) gets a sense of what it’s like to have a large family.

Red: Look at all these … kids. I feel like a Mormon.

Jonathan: You married people have this bizarre need to turn everyone else into married people. You’re like vampires — or Mormons.

Howard’s brother, Gordon the game Warden, had been to Chicago for a visit. Emily finds the alliteration so funny, she invents another brother for Howard named Norman.

Emily: No… his other brother. Norman.

Bob: What does he do?

Emily: He’s a doorman. At the Tabernacle in Salt Lake City.

Bob: How long did it take you to come up with that?