A comedy like no other. For your sister and your mother. 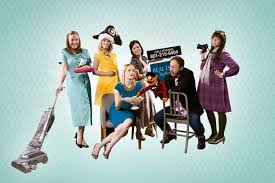 Pretty Darn Funny is a comedy web series about life as a woman, a mother and…comedian.

The award winning Pretty Darn Funny web series started in April 2012 and has continued to keep thousands of people laughing. Pretty Darn Funny has won five Telly awards, honored along side other notable recipients such as Time Warner Cable, ABC Family Digital Media,  and AOL Media.  Its parody videos were featured on The 700 Club, the flagship television program of the Christian Broadcasting Network, airing in syndication throughout the United States.

Season 1 Followed Gracie Moore, a mom who gets more than she bargains for when she forms an all-female comedy troupe in efforts to clean up the local comedy scene. It features a cast of colorful, loveable characters. It will make you laugh. It might make you cry (from laughing so hard). However you spin it, we know you’ll think it’s Pretty Darn Awesome.

Season 2 is launching August 2013 and continues the craziness of Gracie’s life. From battling crossfit and the pressures of Pinterest envy, to competing with the PTA president for superior fundraising cred, Gracie and the troop show that no matter what life throws at you it’s always worth the laughs.

Each new “bite-sized” 6-8 minute webisode is released weekly and is designed for your busy lifestyle. (Meaning you can watch it in-between picking up your kids from soccer, making a fabulous meal that half of your kids will probably refuse to eat, and composing what is sure to be the best blog post ever written in the history of the world. You know, in all your free time.)

Everything Pretty Darn Funny is Brought to you by Deseret Book and Tinder Transmedia.