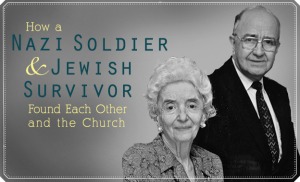 Find out how a concentration camp survivor and a Nazi Waffen-SS soldier met, fell in love, found the gospel, and joined the Church.

Agnes Veronika Erdös and Gustav Palm experienced World War II under vastly different conditions: she as a prisoner in a concentration camp and he as an SS soldier. Amazingly, the two would fall in love, help each other heal, and embrace a common faith in God that would lead them to find The Church of Jesus Christ of Latter-day Saints. BY O. HÅKAN PALM

Agnes Erdös was an only child, born of Jewish parents but baptized into the Catholic church with her family when she was 9 years old. Though she lived a rather carefree childhood, her life was turned upside down when Hitler invaded Poland. Because of their Jewish descent, she and her parents were treated as Jews and were sent to a ghetto in Nazi-invaded Hungary.

In 1944, SS soldiers emptied the ghetto where Agnes and her parents had been living, whisking everyone onto a freight car and from there to a warehouse in Zalaegerszeg, Hungary—their first stop on the way to Auschwitz.

In distant Norway, when news of war between England and Germany came, Gustav Palm felt it was far away and cared little about it. But when Germany invaded Norway, Gustav, with little political knowledge and no one to turn to for advice, decided to join the National Socialist Party, which he found full of bold ideas and ambitious members.

In 1941, Gustav was offered a job as a traffic policeman in the city, where he was confused to be put through harsh military training. However, Gustav’s first assignment in 1942 was not as a traffic policeman, but as a guard at the newly opened Berg prison camp. He quickly realized, “We, as guards, were also prisoners, even though technically we had our freedom. None of us had voluntarily sought the task we were tricked into. The Nazism I had been in contact with so far was not at all what I had imagined it to be. I had simply been very naïve. I was now fully convinced that the organization to which I belonged was wrong.”

To escape life as a prison guard, Gustav joined the Waffen-SS Ski Ranger Battalion Norway. He believed that he “would be able to support Finland’s cause against Communism but had to do so in the uniform of a Nazi Waffen-SS soldier.”

July 6, 1944, Zalaegerszeg, Hungary After being held in Zalaegerszeg for three weeks, Agnes and her family were loaded onto another railcar with the rest of the Jewish prisoners. The next morning, hours away from entering Auschwitz, Agnes’s father woke her to give her a father’s blessing.

Though it was not written on paper, the words of the blessing were recorded on Agnes’s heart: “Father told me that in spite of much suffering, I would survive. I was young and of a pure heart. Father’s spirit would protect me so that I would eventually find ‘the truth.’ He assured me that in the future, we would be reunited with God and His Son Jesus Christ.” Though she didn’t realize it at the time, her father’s blessing would become a lifeline for Agnes. She reflected on its words many times throughout the war and drew great strength and comfort from its promises.

A week after arriving in the Waffen-SS boot camp in Hallein, Gustav became severely ill with scarlet fever and diphtheria, quickly followed by a throat disease. When he finally recovered enough to return to camp, the officers found him too weak to train and sent him home to his family in Onsöy, Norway, for a few weeks. Gustav was grateful for this experience: “Because I was sick, I did not deploy with my unit when they were sent to Finland to fight the Russians. Later, I found out that my sickness was a blessing in disguise because everyone in that unit, save just a few, was killed.”

Arriving at Auschwitz, Agnes and her mother were placed in a line with the old and weak women destined for death. At her mother’s urging, and to the astonishment of fellow prisoners who had just seen others shot for the same act, Agnes safely dashed across a platform to join the healthy line. That was the last time she would see either of her parents.

Not long after her escape to the healthy line, she left the group to find a better barrack to sleep in. When morning came she felt prompted to leave, later recalling, “Israel’s God had heard my father’s blessing thus far, and there it was fulfilled. Once again, I was comforted. Had I remained where I slept the first night, I would have ended up in the gas chambers. I was overcome with a peaceful feeling that I also felt many times during the remaining period of my captivity.”

When Gustav was transferred to the front lines, he was discouraged, recalling, “I thought morosely, ‘It is here I shall either live or die.’” He was chosen with six others to head what was deemed a suicidal attack on the Russian front. As they stormed down a hill, Gustav remembers losing his helmet in the middle of all the gunshots and tanks. He made it to the valley, but a bullet grazed his face and another pierced his thigh. “As sure as I lived, I could have been dead,” he says. “I also clearly remember feeling ordered by someone during my attack to take a step to the right. Which I did. That probably saved the bullet from hitting me directly in the face.”

Throughout the course of the war, both Agnes and Gustav stood up for what they knew was right—even in the most dangerous of circumstances.

In one instance, Agnes refused to report a food theft—and paid the price for her courage by being demoted from a German’s secretary to a toilet scrubber in a bombed out factory. Gustav likewise allowed a couple to keep a stash of hidden meat that he should have confiscated or destroyed. He reflects, “That choice I made was one of the first conscious moral stands I had ever taken in my life.”

At the end of the war, Gustav’s morality led him to make another difficult choice: he turned himself in to the Allies and was taken as a prisoner of war.

After enduring the horrors of captivity, Agnes was finally liberated. She eventually decided to move to Långshyttan, Sweden, where she worked in a factory cafeteria.

Gustav’s path to Sweden as a POW was a difficult and uncertain one. When he was released, Gustav recounts, “They unlocked my jail door. For me, the war was finally over. My first hour of freedom stunned me.” Due to Gustav’s Swedish citizenship, his sister had negotiated his exile to Sweden rather than a political trial in Norway, and his cousin, Helge Palm, arranged a job and apartment for Gustav upon his arrival in Långshyttan.

“I was 23 years old, had only a few clothes and no money, and felt completely ostracized from society,” he shares. “For me it was inconceivable that Germany could be behind the horror that I was hearing more and more about. But now it turned out to be true, and I had taken part in all this. I had served in the Waffen-SS in good faith, but no one now wanted to see it that way.”

But there was at least one person who noticed him: Agnes. “In early March,” she says, “I noticed a young man—so miserable, so lean, and so pale, almost green in his face—standing in the lunchroom queue. He had beautiful, sad, kind eyes.” When she noticed his seat empty one day, she traveled to his nearby apartment to bring him food.

And that was how it all began.

Gustav initially asked Agnes to the movies. “We began to meet more frequently. We each had little money, but neither of us really missed anything. Our long walks and talks took the place of what we did not have. Agnes meant more and more to me.”

Even when Gustav told Agnes about his past in the Waffen-SS, she listened to him with an open and forgiving heart. “Our relationship only got stronger,” Gustav says, “and soon there were ties between us that could no longer be broken so easily.”

“Gustav was 24 and I was 27, and we were truly in love,” Agnes recalls. “We needed each other. He was alone and I was alone, but together we had each other.”

Nothing could separate them—not even their war traumas. They were married on March 2, 1947.

Finding the Gospel Together

Happy years passed by, and they each put their war-ridden pasts behind them. Still, Agnes and Gustav each yearned to find a fulfilling church to go to. They found it when a neighbor lodging two American Mormon missionaries loaned them a Book of Mormon and introduced the Palms to the elders.

The family studied the Book of Mormon and met with the missionaries. Agnes remembers, “Gustav did as it said in the book to do: he asked God in prayer with a sincere heart whether the book was true, and he got a convincing answer to his prayer.”

In 1995, President Thomas S. Monson visited Stockholm to divide the existing stakes. At a meeting with 1,500 Swedish Saints, President Monson told the littleshared story of Agnes, a Holocaust survivor, and her sweetheart Gustav, a Waffen-SS soldier. Finally Gustav’s years of guarded silence about his past were broken.Ten months later, they were baptized in a small river. “It felt like being baptized in the Jordan River. A quiet peace prevailed, and I felt a great inner joy,” Agnes says. Gustav and Agnes are now in their 90s, and through many years and humble circumstances, they have built up a large, devoted family that now exceeds more than 125 people. Their example is one that will forever be remembered—and not only by their family.

And yet, never an unkind word has been spoken on the subject. Their fellow Saints know that their life together is a remarkable example of fortitude, forgiveness, and faithfulness to the Lord. Inscribed on the Palm family crest is the motto “Overcome through love.” And nothing could describe Agnes and Gustav’s legacy more aptly than that: love and faith can conquer all.

Read more of their amazing true story and journey of faith and forgiveness in Surviving Hitler. This book tells even more about the horrors of their war experiences and the multiple miracles that saved their lives. Available at DeseretBook.com.

Källa: Ldsliving.140822. How a Nazi Soldier and a Jewish Survivor Found Each Other and the Church